You might know me from the Cardiff City Forum (AAMB) or on Youtube but now, I've decided to make a blog.

This match was simply huge. If the City won (which we didn't) we would have confirmed our play-off place which would be a magnificent achievement for Malky's men. I think it would lead to this being all over the web: 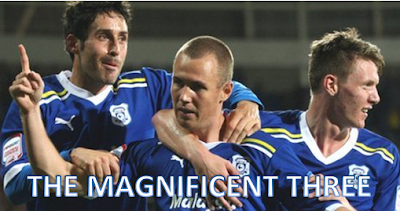 It appeared to the the dream match - good weather; high attendence; plenty of shots; and of couse the 41st minute goal by the player of tomorrow; Joe Mason. It was simply great! A young player on form and it could be the one to enable us to be in the Prem again. However the match was ruined in the 77th minute, after the team tried to double the lead but was denied by an on-form Leeds goalie. The goal was scored by Becchio, the Italian striker. This created shock but we had a lifeline for the step to the 'Big League', which would make the majority happy.

The lifeline was ruined due to a Middlesborough win (due to the ref being unable to issue a red card!). This made the race for the play-offs carry on until the last game which will be against Crystal Palace at Selhurst Park.

I do want the Bluebirds to win however I do not want the re-building of the squad to be ruined due to the Prem. See you soon! :) /o\
Posted by adzaccfc at 10:58 No comments: